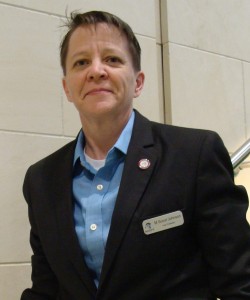 Scout Johnson is the Vice-President of the National Association of Graduate-Professional Students (NAGPS) for 2016. As Vice President, Scout coordinates the work of the board of directors and supports Kristofferson Culmer, the NAGPS President, after having previously served as the South Central Regional Chair. She feels that the work of graduate student governments, partnered with organizations such as NAGPS, is critical to the success of graduate and professional students globally. “We should be driving the change in the way that graduate and professional students are educated, employed, and valued in this country. As the Speaker at her home institution and now the Vice President of NAGPS, it is her goal to empower graduate and professional students to be successful in their academic and professional pursuits. In order to do that, we have to make sure that grad students are fairly compensated, not only through living wages, but through a holistic array of benefits including health insurance, child care, domestic revalidation of student visas, and reasonable debt management.”

Scout is currently working on a PhD in History at the University of Arkansas, after having completed her BA and MA in History at Sam Houston State University in Huntsville, Texas. Her area of specialty is twentieth century history of the South, specifically the Civil Rights Era. Her research focuses on the darker side of the era, women in the Ku Klux Klan, and more broadly, right-wing women’s violence.

In addition to serving NAGPS, Scout is also currently the Speaker of the Graduate Student Congress at the U of A and the 2015 South Central Region Member of the Year. Other campus activities include the history honor society, Phi Alpha Theta, of which she is the president of the Alpha chapter. She also teaches at the University of Arkansas at Little Rock.