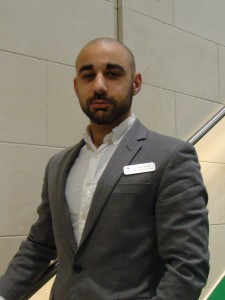 Alex Howe is a doctoral student in the philosophy department at Mizzou, where he researches under Peter Vallentyne. His research interests include moral and political issues surrounding human treatment of animals. Previously, he has worked on issues surrounding the ontological grounds of consciousness. Alex currently works as the Florence G. Kline Research Assistant.

Outside of his home department, Alex has remained highly active in student leadership at Mizzou. Most conspicuously, he is the Treasurer of University of Missouri’s graduate student government, which represents nearly 8,000 graduate and professional students. He is passionate about fiscal pressures on graduate and professional students and how those pressures interact with social justice concerns. A primary focus for Alex is fostering autonomy of graduate student governments and securing formal agreements with administrators.

Alex looks forward to advocating for graduate and professional student employment concerns. He is eager to work with both the International Student Concerns Advocate and the Social Justice Advocate to make progress on issues facing graduate and professional students. His goals for this year include forming coalitions and strategic partnerships, collecting data, compiling strategies, and generating best practices documents in order to empower member organizations. He is also eager to advocating at the national level for alternative academic careers and for recognizing graduate student workers as employees.