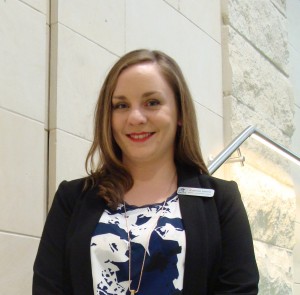 As Director of Legislative Affairs, Kathryn serves as the primary legislative liaison for the NAGPS, chairs the Legislative Concerns Committee and plans the bi-annual NAGPS Legislative Action Days.

Kathryn Harris is a Ph.D. Candidate in Anthropological Archaeology at Washington State University (WSU).  Kathryn also holds a B.S. in Anthropology from Utah State University and an M.A. in Anthropology from Washington State University. Her research focuses on the use of stone tool technology, the contexts of social interactions, and the conditions under which people choose to change their social organizations.  As an archaeologist, she has worked extensively in the western United States and Mongolia.  Most importantly, Kathryn believes that anthropology is useful beyond the ivory tower and that the time is ripe for anthropologists to become the agents of social change they are primed to be.

In 2016, Kathryn hopes to build relationships with legislators and coalitions that share NAGPS’ higher education priorities.  She also hopes to leverage the knowledge and abilities of our many member institutions while creating better opportunities for communication within NAGPS.  Please contact Kathryn at legislative@nagps.org if you have any questions about NAGPS Legislative Affairs.